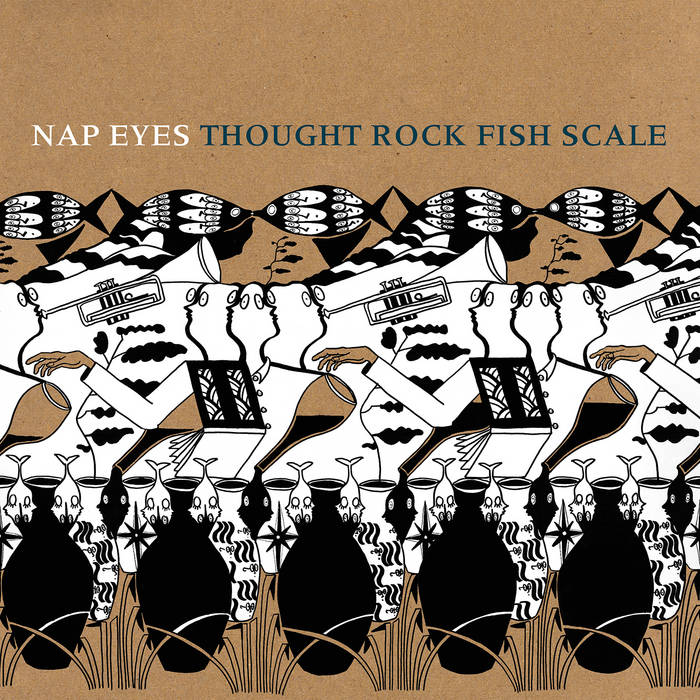 Comiskie In addition to sporting the greatest, most eclectic selection of tags I've seen, this album happens to be exactly what I've been searching for. Favorite track: Click Clack.

Jeremy / HI54LOFI The opening track starts scratching my spirit animal behind the ears and before i know it, “roll it” is on and my spirit animal and i have our heads stuck out in the breeze, banging a drum beat on the roof. Pretty sure my spirit animal is a dog. Favorite track: Roll It.

matthew lisle Always feel like I'm the only person in the room when I'm listening to Nap Eyes. I've a feeling some gigs of theirs may be like that too; back room of a cafe type stuff, for the fortunate few to stumble on. That's how I fantasise about seeing them anyway. Whine Of The Mystic was one of my top three records the year it came out, and there was good competition. This sounds right up there with those songs so I'll take a gamble; I do love these guys.

Nick Green A little presumptious but here is a contender for album of the year 2016!

a house for bugs

Recorded live to tape, with no overdubs, on the North Shore of Nova Scotia, Nap Eyes’ quietly contemplative sophomore record refines and elaborates their debut, offering an airier, more spacious second chapter, a bracing blast of bright oceanic sunshine after the moonlit alleys of Whine of the Mystic. But the briny, cold Atlantic roils beneath these exquisite, literate guitar pop songs, posing riddles about friendship, faith, mortality, and self-doubt.

There is a short poem by the mystically inclined minimalist poet Robert Lax, the entirety of which comprises this single sentence:

the angel came to him & said

I'm sorry, mac, but
we talked it over
in heaven
& you’re going

to have to live
a thousand years

It’s delivered as an apologetic aside, a joke (“sorry, mac”), but this epigrammatic curse carries a weirdly devastating weight. It’s not immortality that this blunt angel promises—if you can accept the unfathomable premise, living forever might have its fringe benefits, I guess—but just a millennial attenuation of desire, of pain. In the immortal words of Charlie Brown and Kris Kristofferson, why me?

The spectral visitation that occurs in the Nap Eyes song “Alaskan Shake,” a centerpiece of the Halifax band’s gorgeous new album Thought Rock Fish Scale, invokes, oddly and unbidden within the song’s narrative context, a black swallow with a crutch, a familiar who heralds “the ghost of the early morning.” “Speaking like a bell”—an apt description of how songwriter and guitarist Nigel Chapman intones his alternately cryptic and concrete lyrics—this unnamed ghost incites little boys and girls to “stand up and be peaceful” and to memorialize a thousand years of foremothers. The song ends with a generationally unspooling refrain of “My old great, great, great, great, great, great / Grandmother mother mother mother.”

It’s one of several movingly ineffable moments on the album that gathers loved ones and legacies at a cautious if affectionate distance, folding them into carefully articulated but centerless koans. Like the “wolf in sheep’s clothing” in “Click Clack,” these eight songs are deceptively simple and gentle, almost radical in their purity of intent and populist subject matter—they are, after all, minimalist rock and roll ruminations on family, friends, work, faith, feelings. But Chapman’s plainspoken poetry, divested largely of description and rhetoric, renders them enigmatic, oracular, allegorical. So in “Stargazer,” ennui and indecision are distilled to a base need “to be clean and try to control my body / ’Cause nobody else going to.” In “Trust,” what shrinks call “trust issues” catalyze somatic paranoia: “Somebody look at me / Do I have a glass eyelid? / Do I have a glass forehead? / Can you see through it?” And in the shivering, anthemic “Lion in Chains,” the eponymous beast hangs, heraldic and haunted by hometown nostalgia, above singer and audience alike—but only following a beautifully banal stanza about the hot water heater problems at the laboratory where Nigel works as a biochemist.

Nap Eyes recorded their second album in the crisp daylight of late May 2014, in the living room and screened porch of a seaside family home near Pictou, a small Nova Scotian town whose evocative name derives from the Mi’kmaq word for “explosion.” Like all of their recordings to date, the album is framed by a set of severe self-imposed strictures: a mere four days to capture as many songs as possible completely live, with no overdubs, to a temperamental old TEAC four-track ¼” tape recorder. The result is a document pristine in its intentional imperfections.

After the dark, drunken night of Whine of the Mystic (recorded nocturnally in Montreal), Thought Rock Fish Scale brings blinding sunlight and blue horizon to these elemental stories of water, fire, and spirit. Compared with its predecessor, this album is far less concerned with the effects of alcohol—excepting “Click Clack,” with its admission that “Sometimes, drinking, I feel so happy but then / I can’t remember why … Sometimes, drinking, I don’t know my best friend for my best friend”—and more concerned with negotiating the mornings after, all the hungover or otherwise creaky, tentative new mornings of a life assembled from discrete days.

Musically, a new delicacy and tautness manifest here as well, a patient willingness to wait; Josh Salter (bass), Seamus Dalton (drums), and Brad Loughead (lead guitar) exhibit consummate restraint. Sonic touchstones remain similar—The Go-Betweens (particularly Robert Forster’s melancholic bite), The Only Ones, Lou Reed, Nikki Sudden, Bedhead—but here the players circumnavigate the negative space of those artists’ styles, summoning them with fond absence, with silences. (Listen to how “Mixer” uses the space between ringing chords to deconstruct a coed party episode—the most archaic and trite of teen pop tropes—into an analytical out-of-body experience, charting a path from the mall to “my Jesus” to a local judge’s recriminations.)

Thought Rock Fish Scale deploys the language of anxiety and self-reflection as a sort of symbolic vernacular. (“Heavy with moral learning / you grumble and bite,” Nigel sings in “Don’t Be Right.”) Chapman’s songs ask us to consider the ways in which we stupefy and medicate ourselves into passivity and longevity; to consider how we seek to lose ourselves within ourselves; how we endeavor to reorient the mind, or if you will, the soul, to disappear into ease and forgetting. Indeed, Nap Eyes make soul music, in the sense that their music describes, from a position of uneasy humility, the often mundane maintenance of the fragile human soul. How long can we keep ourselves buoyed or crutched, even provisionally, like that sad swallow in “Alaskan Shake”? As Nigel asks in “Mixer,” “Then again what else is there / Another life, some other way?”

+ RIYL The Only Ones/England’s Glory, The Modern Lovers, The Clean, The Verlaines, The Go-Betweens, Nikki Sudden, Bedhead, and all things Lou Reed
+ Available on virgin vinyl as an LP, with heavy-duty chipboard jacket, full-color inner sleeve, and lyrics, as well as on gatefold matte CD and digital formats.
+ Vinyl edition includes digital download coupon.