Whine of the Mystic 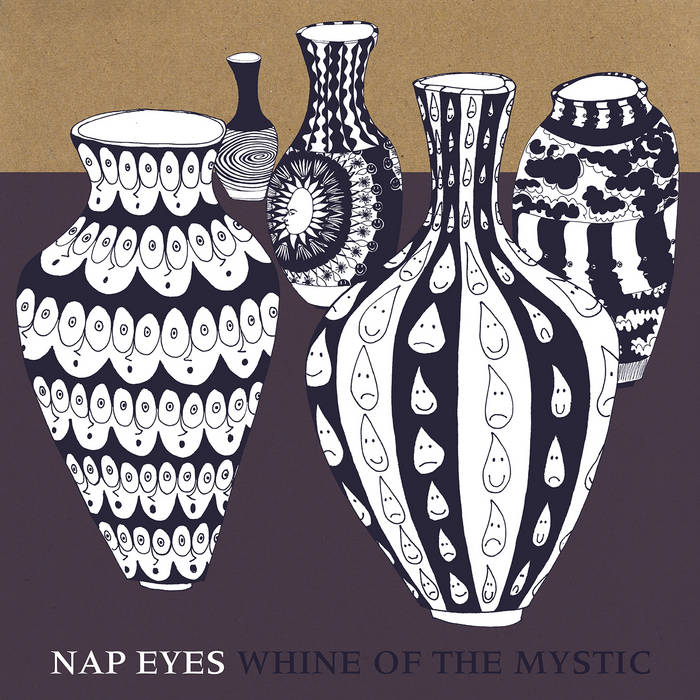 Bruno Packard Hill I have played Dark Creedence 100 plus times in the last 12 months, gives me a boost every time Favorite track: Dark Creedence.

Stephen Spencer One sickness of brain protein aggregation, one of upregulated oncogene Favorite track: No Fear of Hellfire.


Drink wine, for it is everlasting day.
It is the very harvest of our youth;
In time of roses, wine and comrades gay,
Be happy, drink, for that is life in sooth.

Nova Scotia’s Nap Eyes is the greatest band you’ve never heard, and Whine of the Mystic is their first full-length album, a brilliant small-batch brew of crooked, literate guitar pop refracted through the gray Halifax rain. Recorded live to tape with no overdubs, it’s equal parts shambling and sophisticated, with one eye on the dirt and one trained on the starry firmament, inhabiting a skewed world where odes to NASA and the Earth’s magnetic field coexist easily with songs about insomnia and drinking too much.

The record’s punning title references (and wryly deflates) the great 11th-century Persian mathematician, astronomer, and poet Omar Khayyám’s famous propensity for wine-soaked mysticism. Songwriter, singer, and rhythm guitarist Nigel Chapman’s songs share with Khayyám—a rather quaintly old-fashioned inspiration—a certain vinous preoccupation that may well lubricate the similarly conversational tone and philosophical focus. Throughout the record, workaday details punctuate (and puncture) cosmic concerns, as Nigel wrestles with air and angels, struggling (and often failing) to reconcile the Romantic rifts, both real and imagined, that define our lives: between chaos and order (or wilderness and paradise, as in “Tribal Thoughts”); solipsism and fellowship (“Dreaming Solo” vs. “Oh My Friends”); the anxiety of social (dis)orders both big and small (“The Night of the First Show”; “No Man Needs to Care”); and the various intersections and oppositions of religion, art, and science (“Dark Creedence” and “Make Something.”)

The latter three collapsing categories ring particularly relevant for Chapman, a biochemist who spends his weekdays in a research lab, mutating the gene/DNA encoding of a cell-surface receptor protein. As with us all, our diurnal labor and studies inform our creativity, day creeps into night, and so it’s no surprise that sicknesses of “brain protein aggregation” and “up-regulated oncogene” appear in “Make Something,” infecting, by proximity, the more traditionally songwriterly tropes of heart sickness that haunt “Oh My Friends” and “Dreaming Solo.” The two longest and most ambitious songs here, “Delirium and Persecution Paranoia” (which takes place, in part, within the Earth’s core) and “No Fear of Hellfire” (which takes place, appropriately, on a Sunday morning) clatter and buzz along with heedless momentum, tackling, respectively, unstable psychology and geology, and the riddles and contradictions of faith. The songs resonate because they manage to delicately balance the cryptic and the quotidian, rendering a compellingly honest equivocation without evasiveness, a relatable ambivalence without apathy.

Originally released in 2014 by Plastic Factory Records in a highly limited edition of 200 LPs, Whine of the Mystic has gone largely unheard beyond the finely-tuned ears of Montreal and the Maritime Provinces, so Paradise of Bachelors is delighted to introduce it to more Southerly climes. In typically insular Halifax music scene fashion, Nap Eyes shares three of its four members—Josh Salter (bass), Seamus Dalton (drums), and Brad Loughead (lead guitar)—with two other notable local bands, comrades and sometime touring partners Monomyth (Josh and Seamus’s project) and Each Other (which includes Brad as well as Nap Eyes recording engineer Mike Wright.) Though the indelibly wistful vocal melodies are Nigel’s, Josh, Seamus, and Brad are the primary architects of Nap Eyes’ keen sonic signature, which cruises briskly and beautifully along the dog-eared axes of jangle-jaded Oceanic pop music (The Clean, The Verlaines, The Go-Betweens), and through the backpages of Peter Perrett (The Only Ones, England’s Glory), via all things Lou Reed and Modern Lovers, without ever sounding very much like anything else happening today.

Part of the secret of Nap Eyes may reside in their avowed recording method, which eschews any overdubs in favor of capturing the immediacy and singularity of full-band live performances. Nigel explains their methodology best: “You get the feeling of the song; everyone’s feeling, all as one take in time, so things fit together naturally, and even mistakes sound natural. This not to discredit any of the incredible recordings made by different principles; it’s just its own kettle of fish.” As a result, both lyrically and musically, Whine of the Mystic articulates the urgency of youthful grace. It’s the sound of being young and alive in the city, a tenuous and impermanent counterpoise of recklessness and anxiety, archness and earnestness. “The very harvest of our youth,” indeed!

Nap Eyes will release a follow-up album of all-new material in early 2016, likewise brought to you by You’ve Changed Records (in Canada) and Paradise of Bachelors (throughout the rest of the world.)

+ RIYL The Only Ones/England’s Glory, The Modern Lovers, The Clean, The Verlaines, The Go-Betweens, Bedhead, and all things Lou Reed.
+ First widely available edition following an initial extremely limited-edition Canadian release.
+ Available from You’ve Changed Records (in Canada) and from Paradise of Bachelors (throughout the rest of the world.)
+ Available on virgin vinyl as an LP, with heavy-duty chipboard jacket and lyrics insert, as well as on gatefold CD and digital formats.
+ Vinyl edition includes digital download coupon.